In 1994, my brother Rich surprised us all with the news that he, a confirmed bachelor in his late '30s, was finally getting married. He had been travelling in Chile, and had fallen for the daughter of a dentist. Richie always had sensitive teeth. Before the sudden engagement, he and Monika decided to trek together through the Andes mountains, sleeping under the stars and watching the UFOs whiz by. Monika later told us that this nomadic wandering between two unmarried people caused a serious rift between her and her devoutly Catholic parents. For a time, she was persona non grata which must have been unimaginably painful for someone whose life revolved around family.

But parental disapproval softened, as the two lovers decided to get married. Rich called to tell me the news. I could hear bright chatter in the background. “I'm hanging out at Monika's,” said Rich, his voice gurgling with laughter. “Family is very big here. Her family is very warm, very close. Her grandmother is here. Some of her cousins. They're all talking about their periods.” 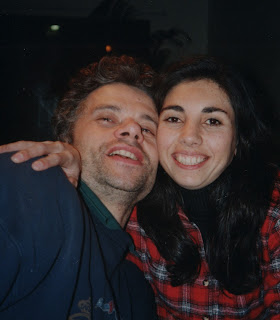 The weather couldn't have been nicer in Santiago in early February when Rich and Monika took their wedding vows, surrounded by Monika's parents, grandmother and cousins. A feast was laid out in the garden, and the younger children chased each other excitedly, weaving in and out among the grown-ups. The sun shone and a mild breeze stirred the leaves of the nutmeg trees. Everyone knew that Monika had bravely set her gaze on a life with my brother in faraway Vancouver. It's not certain if the family talked about the necessary adjustments: Rich was not the neatest of persons, while Monika was quite particular; Monika's temperament was hot and fiery, Rich was famous for laughing away life's troubles. And what about the weather? From Santiago's mild climate to Vancouver's rainy winters, during which the standard weather report sounded like a broken record: “Ten degrees and raining.”

Airline tickets were purchased. First stop would be Toronto, then Vancouver. Rich asked if he and Monika could stay with John and me for a few days until they made their way to Vancouver. He wasn't certain about the flight's arrival time, and, anticipating delays with immigration – Monika was coming with a non-resident's visa – we planned that they would take an airport shuttle, which stopped at a subway station not far from our home. We would pick them up there.

The day they were to arrive dawned clear, sunny – and bitterly cold. It was one of those winters before climate change replaced Toronto's snow with rain. During that winter of 1994, we regularly woke up to the outside thermometer registering minus 20 degrees Celsius or even lower. It took forever to bundle up before stepping outside: long underwear under our jeans, turtleneck sweaters, fleece jackets, down jackets, wool hats and mitts, scarves wrapped around our necks, thick woolen socks inside heavy winter boots.

We drove to the Wilson subway station, the blue Honda sedan sputtering in the cold. The heater was just starting to throw out some lukewarm air when we reached the station. John parked the car in the lot across from the subway, and we walked over to the entrance and waited inside. Every time someone opened the doors, a blast of frigid air tore at our ankles. We were grateful for the many layers of clothes, even if we looked like characters out of a Michelin tire ad.

After about five minutes, I caught the sight of my brother's head with its familiar tousled brown hair, rising into view on the escalator. A slim raven-haired, olive-skinned beauty stood behind him, her large black eyes darting around.  She wore tight black jeans, fashionable stiletto-heeled ankle boots and the skimpiest black leather bolero jacket I had ever seen. No hat. No scarf. No gloves. We rushed forward and enveloped them in downy hugs, then took their large suitcases and headed for the door. Monika tiptoed outside. As the cold air rushed to greet her, she tried to pull her jacket closer around her thin frame. She looked up at the dazzling blue sky, then, in broken English cried out, “The sun, he shine – but so col'!”

By the time we crossed the intersection and returned to the car, her teeth were chattering. We quickly drove home. I turned up the furnace thermometer to 28 degrees C. The first order of the day was to brew a strong cappuccino for both of them, and then I headed upstairs to my clothes closet. Spare long johns – bright purple, courtesy Mountain Equipment Coop. A purple zip pullover to match. A blue fleece neck warmer. A green fleece jacket. My blue down jacket. Red fleece hat; padded black mitts. Thick grey woolen socks. Two pairs.

Monika put on every last stitch of clothing, even the down jacket, hats and mitts. Gone was the fashionista: she looked clown-like in the vivid clashing colours. But at least, and at last, she was warm.
Posted by Mary Lou van Schaik at 6:55 PM