During the time my family lived on a farm near Mount Forest, Ontario, my mother worked as a visiting nurse with the Victorian Order of Nurses, or VON as it was known. VON equipped all their nurses with Volkswagen Beetles in a Virgin Mary blue that matched the darker blue uniforms and wool coats worn by the nurses. Everyone in Wellington County, the area served by this branch of VON, knew Maman's Beetle: not because of its color, but because of her fast driving. Her priority was with her patients – changing dressings, administering injections, comforting them and their families. Patients loved her because she gave them all the time they needed and more, but that meant recovering those lost minutes by speeding along to the next call.

Neighbours remarked on how they heard the distinctive burr of the bug and watched my mother smoke by as she raced along the concession roads, deftly down-shifting and swerving to avoid potholes. Stop signs? Roll through and get moving. Her acceleration was wicked, as if everything counted on getting up to speed as fast as possible. Lives could be saved or lost in those few seconds. In the winter, slippery roads sometimes defied her. Once an icy patch tossed the Beetle into the ditch. Maman walked to the nearest farmhouse. About five minutes later, four hefty farm lads walked back to the bug with her, positioned themselves at each wheel, and lifted the darn thing back onto the road. Maman thanked them and sped away. 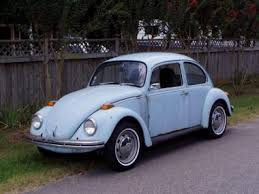 When we moved from the farm to Guelph, my mother kept her blue Beetle – and her driving habits. We lived in the southeast part of Guelph; the VON office was in the northwest. Maman was blessed with a mental GPS, configured to “fastest route, please.” Just as she knew all the back roads of Wellington County, she had a cab-driver's knowledge of Guelph's short-cuts, and always chose the shortest path from point A to point B. From our home on Delhi Street, the fastest route to the VON office was east on Delhi, a south turn on Eramosa and then, half-way down the hill, a left onto King Street, which ran diagonally down to the river and connected with York Street where the VON office was located. Taking this route bypassed the longer, slower downtown streets. In the face of the oncoming traffic surging up the Eramosa hill, you could see Maman silently calculating just how quickly the car would have to move to make that left turn. Often, she would cut the corner sharply by pulling the wheel hard to the left and stepping on the gas -- much to the terror of anyone sitting in the front passenger seat. A few times my heart almost stopped and I screamed at her to slow down. She simply ignored me, eyes intent on the road, foot firmly on the gas. She had a tiny statue of Saint Christopher glued to the Beetle's black pebbled dashboard: maybe it was his influence, or else the platoon of guardian angels watching over her, for she never had an accident – at least not during those years.

Now, I would like to boast that I am a far more cautious, and therefore, far better driver than my mother. But that would be an outright and pompous lie. My husband John would be the first to call me on it.

John and I enjoy different relationships with the gas pedal. He likes to toodle along at the speed limit and gawk at the latest highway or building construction along the way. This is fine when we're heading into the city to go to Home Depot or Value Village. It's not fine when we want to see a movie, and we left late, and the line-up will probably snake around two city blocks, and we won't get a ticket, and we'll end up disappointed...well, that's where my disaster-preparation mind goes. So when we have to get somewhere by a fixed time, I offer to drive.

I remember one long drive to visit John's father and his wife Beate who lived on Christian Island in Georgian Bay, east of Penatanguishene.

It was a swelteringly hot Friday in July, which sorely tested the air-conditioning in our old Honda Accord. We had been on the road since 4 a.m. that morning. The drive takes about seven to eight hours, depending on who's behind the wheel. Our route took us east along Highway 60, through Algonquin Park, over the top of Orillia, across Highway 400 on the Horseshoe Valley Road, and then through a grid of concession roads to a little outpost called Cedar Point. There, a 20-minute ferry ride connects the mainland with Christian Island. Most of the secondary highways posted speed limits of 80 kilometers per hour. I ignored the signs and drove a steady 100. The times John took the wheel, we dropped down to 85, while I practised deep breathing to tone down my impatience.

Crossing over Highway 400, we turned north on our first concession road towards Cedar Point, which was still some 70 kilometers away.

It was now almost 12:30. If we didn't make the 1 o'clock ferry, we faced three miserable hours waiting in the heat. The only thing besides the ferry at Cedar Point is a tiny convenience store that's more a shack than anything else. “It would be great if we could make the 1 p.m. ferry,” I said. “Yeah, it's kinda hot out there,” John replied. “I think we can make it, but only if you let me drive,” I said decisively. John raised his eyebrows, and after a short pause, nodded. He stopped the car, we dashed around and switched places.

“Okay,” I said. “You look out for kids – and cops.” I pushed in the clutch, ran through the gears and mashed the gas pedal to the floor. The speedometer leapt to the right – 80, 100, 120, 150, 160. That was as fast as I trusted myself to go. Luckily, in this part of Ontario, the land is high and flat, and the roads are straight and paved. Even luckier, there was hardly another car on the road. Whenever we did meet another car, I slowed down to a prudent 120. And no-one seemed to be out: no toddlers crawling in the grass, no youngsters playing road hockey, no adults puttering in gardens, or sitting in lawn chairs on front porches. They all must have been hiding from the heat, watching movies in their cool basements or air-conditioned family rooms. All my concentration was on the road, and I felt my mother's genes flowing into my body like high tide. As we flew along, John kept blessedly silent, his right hand firmly gripping the passenger ceiling strap. The telephone poles whipped by; golden barley fields spiralled crazily. Like my mother, I paid little attention to stop signs other than to look both ways before hurtling across the intersection. Corners were trickier. I had to brake enough to manage the curve yet not lose too much speed. From time to time, I glanced down at the car's clock. Five minutes to go and we were less than 5 kilometers from the ferry. Would we make it? The pavement ended, and we fishtailed on the dirt road, gravel spinning up from the wheels. A thick oak forest shadowed the road, the road zigzagged left and then right, more quick, furious braking, and then a sign, Cedar Point Ferry 1 km, flashed by. We crested a hill and caught sight of the magnificent turquoise waters of Georgian Bay. And there, still hugging the dock, sat the ferry. A handful of cars and pick-up trucks were already on board, with one final vehicle, a white Chevy SUV trundling across the metal ramp onto the ferry. We zoomed down the hill and squealed to a stop. The ferry operator, a middle-aged man with a weatherbeaten face, flipped his cigarette over the side. He signalled me to drive forward. Suddenly I became aware of my pounding heart, my forehead damp with sweat and my shaking hands. I rolled down the window to pay the fare. The thick noxious smell of rubber from the over-worked brake pads filled the air and the Honda's tires steamed.

“Did some smoking, eh?” grunted the ferryman. I turned to John, and we both laughed giddily. I imagined my mother laughing with us. 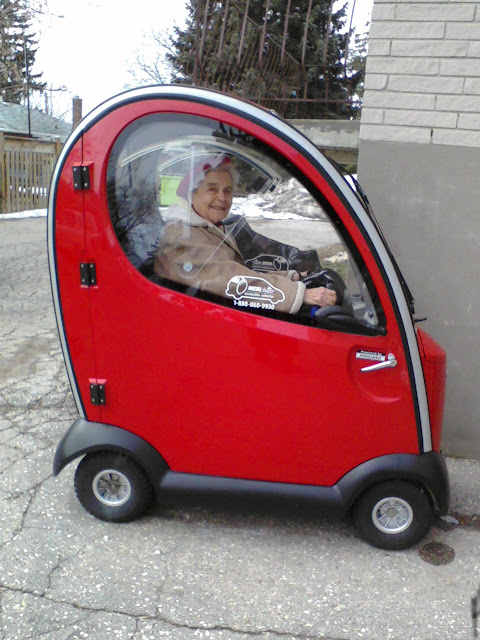 Maman stopped operating a car when she turned 85, but that hasn't ended her driving. These days, her vehicle of choice is an all-weather Shoprider Flagship, an enclosed scooter that she affectionately calls her “Doohickey.” Her only complaint: it doesn't go fast enough.